though i still had work, i considered myself to be on 'christmas vacation' all week as well. though i did not take many pictures, this would have been the most significant anyway. i acquired a new bottle. here's my week: 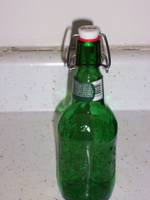 tuesday - played games (catchphrase) with kara (who was in town for the evening) and friends at lindsay's.

wednesday - what did i do wednesday? let me think, went to doctor in AM. what else?

thursday - when i was able to obtain this bottle from crackers. i just like it.

friday - did sabrina's room. watched the ball drop with liz and eric. was able to see kerri for just a bit on her last night in town. had beers.

saturday - my baby came back! and we played games last night. ryan, of course, won at scene it, but lindsay and i held on own against ryan and eric in cranium. don't listen to whatever they say.

sunday - walmart adenture. got stuff we needed to go with our christmas presents and groceries. yippee.
scribbled by jessica at 3:34 PM