the zebra and the lion

i mentioned yesterday about the zebra that jumped in the lion's exhibit and almost became dinner. 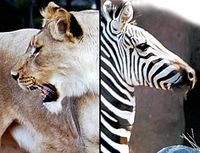 i found the story. both of these animals have a checkered pasts: 'In October, Zeke, right, a 4-year-old Grant’s zebra, is thought to have chased a rhino into a moat, where she drowned. In July 2002, Kalisa, left, a 6-year-old African lioness, killed a female lion over a wild duck.'

they are getting rid of the zebra.
scribbled by jessica at 9:06 AM