it's an unfortunate accident, no need to banish zoos altogether 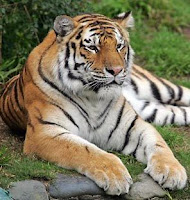 it is terrible what happened with the tiger in San Francisco zoo. the tiger killed one boy and mauled two others. it is coming to light now that the boys taunted the tiger, aiding in it's escape (experts say there is no way the tiger could have escaped without some kind of help, as tigers cannot jump that high to get over the fence). what were they thinking? tauting a tiger is close to the last thing i would ever do!

i feel bad about the two boys that were injured but will recover. i would think that the only thing worse that being mauled to death by a siberian tiger is being mauled and living through it.

Email ThisBlogThis!Share to TwitterShare to FacebookShare to Pinterest
Labels: crime and social justice